Autonomous vehicles will change the lives of hundreds of millions of people, and the world as we know it. If vehicles could drive themselves why would anyone ever want to drive again? Driving is time consuming As a driver you must place your full attention on traffic and hazards for the duration of your trip. Driving can be stressful and tiring. By the time many get through heavy traffic on their way to work, school or an appointment they are exhausted. So much of their energy is consumed daily by their commute. The average commuter spends 6 hours a week driving. Over the course of a year that’s over 300 hours.[1] If you do the math, a lifetime of driving can add up to over 18,000 hours or 2 years! Some will spend much more depending on location. Cities like LA, Chicago, Washington, London and Tokyo demand much more from drivers, and that doesn’t include larger cities in developing countries which can fare much worse.

Autonomy Will be Good for the World

The verdict is out, people waste a great deal of valuable time each week driving from one destination to the next. The opportunity cost is great. We live in an age where everything around us is changing at an accelerating rate. If knowledge is the key to advancement how can one possibly find time to keep up when we’re spending as much as an hour or more each day driving. If you fail to keep up with technology, culture and trends you could very well miss out on opportunities that could benefit you and your family. What if your commute became an opportunity to meditate or sleep? Imagine if the 2 years many adults spent driving over the course of their lifetime was now spent reading, studying, meditating and sleeping. What great value that would add to their lives!

Autonomous vehicles (AVs) will improve quality of life for many people. Commuting to the office will no longer be a stressful part of people’s lives, but a productive one. They could spend it preparing for their morning meeting or perhaps even join the meeting while their AV navigates to the office. That could mean more time with their families, and less stress getting to and from work which could reduce stress related diseases and illness. Parents driving their kids to school or soccer practice could now spend quality time with their children on the way, watching a show or playing a game on the way. And what about the elderly that are reliant on public transportation and ride sharing.[2] They could safely head to their checkup or meet with their grandkids while they relax or have a snooze on the way. Roadway safety will improve significantly. The more autonomous vehicles on the road, the more safe it will be to commute. Autonomy has the potential to save millions of lives, and prevent many debilitating vehicle related injuries that occur each year. Some experts believe autonomous vehicles could reduce road incidents by as much as 90%.[3]

The Road to Autonomy

There are many companies working on self driving, but only a few have achieved notable advancements. Some of the biggest disruptors include Waymo, a Google subsidiary, Aptiv, Uber and Tesla. Like humans, every AV needs a detection system, its eyes, a computer or brain and a program. There are 5 levels to autonomy, and level 5 is very, very hard. Most automotive companies have not even reached level 1. Tesla vehicles are capable of level 3 autonomy, and hopes to reach level 5 sometime this year or early in 2021.

The detection system – the eyes

The vast majority have decided that LiDAR, a detection system which works on the principle of radar, but uses light from a laser is the answer. LiDAR balances the weaknesses of today’s sensors. Unlike a camera, it sees just as well at night as during the day. It can detect detail better than radar, allowing it to pick out things like pedestrians and cyclists. There are some big questions about LiDar though. One in particular is the high cost of the hardware which can run as high as $75,000 per vehicle, multiples higher than the base cost of most vehicles. Cheaper options are in development, but there is little real-time experience to prove their worth. Elon Musk, CEO and co-founder of Tesla believes LiDAR will be a failed experiment. At Tesla’s Autonomy Day debut last April he said, “Anyone relying on LiDAR is doomed… It’s like having a whole bunch of expensive appendices. Like, one appendix is bad, well now you have a whole bunch of them.”[4] Tesla vehicles use a series of cameras, ultrasonic sensors, and radars that are interpreted by algorithms inside the onboard computer to present a vision of the the road, one that allows its Autopilot software to drive semi-autonomously for extended periods of time.[5]

The brain – the computer

Recently, Tesla unveiled a new microchip that is now included in every new Tesla vehicle it produces. Musk claims this chip is the best in the world, far more powerful than anything chip designer Nvidia produces. Built by Samsung in Texas, the Tesla chip is high-performance and special-purpose, manufactured with autonomy and safety in mind. Tesla is about halfway through the design process for the next-generation chip, which Musk estimates will be three times as powerful.

The keystone – the program

Once the eyes and brain are have been decided on there’s one missing piece: the program. And it could perhaps be the greatest challenge of them all. Think of the program like this. When a human is born they have eyes and a brain which allow them to see and think, but they still require a program, education and experience. Most companies have set their sights on geofencing. A geofence is a virtual geographic boundary, defined by GPS or RFID technology, that enables software to trigger a response when a mobile device enters or leaves a particular area. The vast majority of self driving vehicles being tested by Waymo, Aptiv and Uber require a geofence to operate. Two of the greatest challenges with geofences is the vast amounts of them required and the limitation it puts on the driving experience. If an area hasn’t been mapped out the vehicle will be unable to proceed. It’s kind of like an out of bounds zone. Tesla vehicles, on the other hand will have no need for geofences. Musk claims they will be capable of driving themselves anywhere on the planet, under all possible conditions, with no limitations using a combination of cameras, sensors, front facing radar, machine learning and their microchip.

Imagine opening an app on your phone, selecting your destination and your pick up location. In 5 minutes the vehicle arrives. Once you approach the vehicle you hold your phone next to the door, the door unlocks and you hop in. This being a robotaxi the car is empty. It’s just like having your own car. You have the freedom to do just about anything while you’re heading to your destination, but you can sit back and relax. Once you’re in the vehicle the intelligent assistance asks, “Are you ready to head to your destination, _______?” You reply with an enthusiastic, “Yes, let’s go!”. The vehicle begins moving. As there is no steering wheel there is plenty of room in any seat you choose. You decide to pick the driver’s side. You recline your chair slightly, pull out your iPad, connect to the onboard WiFi, dial into your one o’clock meeting. After your meeting you ask the personal assistant to put on some relaxing music. While Chopin’s Nocturne No.2, Op.9 is soothing your soul playing you doze off. As the vehicle navigates through the city streets you decide to sneak in a 20 minute power nap. Sensing you are sleeping, the intelligent assistant wakes you two minutes before arriving at your destination, “You will arrive at your destination shortly, please ensure you have all of your belongings.” As you arrive the door unlocks and you step out. You open the app, select ‘Complete’. The doors lock and the vehicle heads to it’s next appointment. Satisfied with the ride you give it a 5 star rating. A post trip scan of the interior of the vehicle determines no damage occurred to the interior of the vehicle while you have been onboard. You receive a 5 star rating which allows you to keep your perfect customer rating. 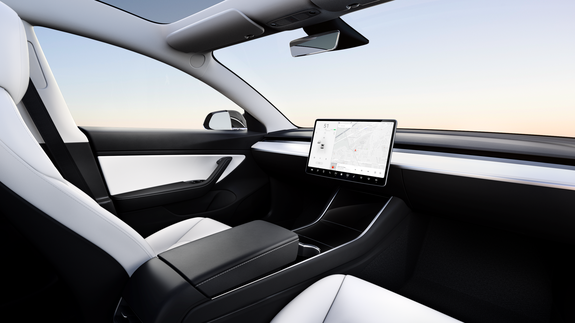 This might sound far fetched and perhaps similar to services provided by ride sharing companies like Uber or Lyft. The difference is the vehicle would have no driver. It would drive itself. This is the future Tesla is planning for. Musk has said Tesla will roll out autonomous taxis next year in some parts of the US. The service will allow Tesla owners to add their cars to a Tesla network, which he said would be akin to Uber or Airbnb. Musk recently said, “We will have more than one million robotaxis on the road… A year from now, we’ll have over a million cars with full self-driving software.” Musk predicts, Tesla robotaxis could generate owners up to $30k a year in profit for their owners.[6]

Auto and tech industry experts believe self driving for the general public is a long ways away. The day consumers are able to purchase and experience vehicles with full autonomy is most likely still several decades away.[7] Autonomy afterall, is a convenience that creates a long list of questions and challenges. Many critics ask, “Will humans be safe in the hands of a self driving car?” Musk and Tesla believe they will. Their timeline for full autonomy is much more ambitious and optimistic than the rest of the auto industry. Tesla vehicles produced today already have the hardware for full autonomy. All that remains is mastering the software. They plan to release a beta version of full self driving as early as next year. How long this would take to be ready for the general public, and receive approval is unknown. Regardless of whether full autonomy happens in the next few years or decades, the future for mass transportation will be very exciting.

Explorer of new worlds, a fearless philosopher, and a risk-taker that enjoys a good beer and mountaintops View all posts by Joshua Nash